The M60 Autodialer Central Station is designed for users who either have multiple M60’s or have a M60 in a critical situation.

The Central Station works as a central hub between all the users sites.

A Central Station works as follows.

The Central Station is connected to a standard telephone line and accepts information (Alarms and occurrences) from multiple M60’s as well as gathering information (Auto polling / interrogation) from them.

The Central Station provides a visible and tangible real time display and records all events from the linked M60’s. It performs all its routines e.g. Auto polling, with out effecting the standard dial out and response procedures at the remotes sites.

Above is the Main Interface for the Software

Above is a Generated Report

Features of the CENTRAL STATION:

AUTO POLLING - The Central Station can be programmed to automatically dial out and interrogate all the M60’s at pre-set times to regularly check the status at each remote site. This feature also has a number of other benefits including; checking the condition of the telephone lines, M60 Status and whether the M60 has been turned off. Auto polling can be initiated automatically, manually or when only one alarm has been reported.

ALARM- reporting from outstations. Automatic recording and storage of history of alarms.

DISPLAY- of alarm history - with details of time, date, location and alarm type.

PRINTOUT- as alarms occur they can be printed out on a printer with details of time, date, location and alarm type.

ALARM OUTPUT- If one or more outstations is in alarm or cannot be interrogated on auto polling then a signal can be activated to produce an audible alarm or as a trigger to make an alarm call via a local M60. - This allows the communication of a fault even if there is a catastrophic failure at the remote site. 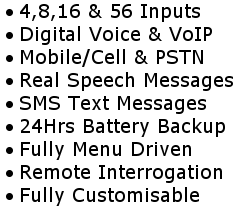